Glossary on the topic of lasers and laser systems

CO2 laser:
Carbon dioxide lasers are among the most common types of laser in industrial and medicinal applications. The CO2 laser is a gas laser whose infrared light, with a wavelength of around 10 µm, is produced by carbon dioxide. In addition, nitrogen, and usually also Helium, are required as a component of the gaseous medium for operation. Carbon dioxide lasers offer a wide power spectrum from several mW to several hundred kW in continuous operation and a high efficiency of up to 20 percent. With these properties, they are particularly suitable for cutting, scribing, perforating and welding different foil materials. The first available gas laser was a CO2 laser.

Coresta Unit (CU):
Unit of air permeability of paper as defined by the Cooperation Centre for Scientific Research Relative to Tobacco. It describes the volume of air in cubic centimetres per minute which passes through an area of one square centimetre at a pressure difference of 1 kPa. This ventilation of a paper can be systematically increased by means of laser perforation. In this case, an online perforation within the cigarette machine or an offline perforation via an independent system can be used.

Demineralised water:
Purified water freed from dissolved mineral substances. It can replace distilled water where there are fewer requirements for purity. The use of demineralised cooling water prevents limescale deposits in the cooler.

E
EVA:
Ethylene vinyl acetate, a copolymer of ethylene and vinyl acetate. Depending on the amount of VA, the properties vary from largely similar to polyethylene to rubber-like. Applications: Improvement of the material properties of films, adhesive for paper.

F
F-theta lens:
A fisheye lens with the special feature of the distance of a pixel from the centre of the image being proportional to the angle of incidence. This type of equidistant lens generates a conformal image, which is also suitable for precise angle measurements.

Fibre laser:
A solid-state laser with a fibre as a laser medium, just as they are used as light guides. The total reflection at the perimeter of the fibre helps guide the light beam. As a result, the fibre laser enables outstanding beam quality as well as very long stretched media and therefore a high peak power. Examples of application: Laser marking, as well as laser cutting and laser perforation of challenging material combinations.

FMCG:
The abbreviation of the English term "Fast Moving Consumer Good" denotes goods that are sold quickly and at relatively low cost. These goods often yield the seller only a relatively small profit margin.

G
Galvanometer scanner:
A laser scanner, in which a galvanometric mirror guides the laser beam over the object to be detected.

Galvanometric mirror:
A form of mirror galvanometer not to be used for measurement purposes. Originally an ammeter, whose pointer is replaced by a mirror which deflects a light beam proportional to the applied current.

H
I
J
K
L
Laser:
A source of radiation that generates coherent light. This allows focused beams in the micrometer range. The term is an English acronym, which stands for "Light Amplification by Stimulated Emission of Radiation". This term lacks one essential aspect of the functionality of a laser, namely an optical resonator. The resonator is filled with a laser medium which generates a specific radiation stimulated by pumping energy.

Laser class 4:
Indicates the highest hazard class for laser. Even scattered reflective radiation can cause injury to eyes or skin. Class 4 lasers are capable of igniting combustible materials. Most of the laser systems used in industry are included in this safety class.

Laser machining:
Production with laser as a tool.

Laser mode:
The intensity of laser light is not homogeneously distributed across the cross section, but forms regular patterns due to the inevitable diffraction of light. Mathematically speaking, these laser modes correspond to the inherent solutions of the optical resonator.


Laser scribing:
in English - laser scribing Examples of application include: Manufacture of opening aids on packaging.

Laser shutter:
Optical shutter that can deliberately prevent the emission of laser beams.

N
O
OPP:
Oriented polypropylene film. Polypropylene film stretched in longitudinal, transverse or both directions. Stretching improves the material properties of transparency, resistance to cold, gas tightness, as well as mechanical properties, including, where applicable, anisotropic ones. In addition, it can be used to reduce thickness and basis weight.

Optical resonator:
An optical resonant circuit, in which the light travels back and forth between two mirrors with a common optical axis. The distance between the mirrors exceeds their diameter many times over. This keeps only the radiation in the resonator, which spreads almost or completely parallel to the optical axis. In a beam bundle thus parallelized, the part whose wavelength is in an integer ratio to the double mirror distance is amplified.

P
PA, Bio PA:
The polymer polyamide produced by polycondensation is better known under the generalised brand name of nylon. The area of application ranges from synthetic fibres and packaging material to expansion dowels.

PE:
The polyolefin polyethylene, which is milky and cloudy in its pure state, is produced in two versions, as PE-LD and PE-HD. It displays excellent resistance to acids, bases, alcohols and esters. It reacts only very slightly with plant oils, aldehydes and ketones. Its resistance to mineral oils, aliphatic and aromatic hydrocarbons and oxidants is limited. Polyethylene is not suitable for use with halogenated hydrocarbons.

PE-HD:
High-density polyethylene is produced using the low-pressure process and is therefore also known in German as ND-PE. The polyolefin has a temperature range of -60 to 90 °C, briefly up to 120 °C, and a higher tensile strength than @PE-LD, also in relation to its weight. In addition, PE-HD films have a lower permeability for water vapour, oxygen and carbon dioxide than PE-LD films.

PE-LD:
Low-density polyethylene, also known in German as HD-PE, is produced using the high-pressure process. This is the original, older manufacturing process, resulting in a plastic with a lower tensile strength than PE-HD and a lower temperature range of up to 60 °C.

PET:
Polyethylene terephthalate is the most widely used member of the polyester group. This polymer is primarily used for synthetic fibres, beverage packaging and other transparent packaging. PET exists in amorphous and semi-crystalline form. Depending on the size and structure of the crystal, the latter may appear milky-white. Otherwise, the plastic is naturally fully transparent.

PLA:
Polylactate is a biodegradable polymer, which is used as the second most important material in 3D printing after ABS.

Plasma laser:
A laser with an ionised gas as a laser medium.

PMMA:
Polymethylmetacrylate, better known under the brand name Plexiglas and as acrylic glass.

PP:
Polypropylene is a thermoplastic polymer from the group of polyolefins. In its pure state, it is milky and cloudy like polyethylene, but has a different temperature range from 0 to 160 °C. PP is therefore suitable for packaging as a film or container for liquids and foodstuffs that are hot-filled or heated in the packaging.

PUR:
Apart from thermoplastic variants, polyurethane is one of the duroplasts, substances that do not soften when exposed to heat. The plastic is suitable for fibre-reinforced materials as well as for foams.

PVC:
Polyvinyl chloride, widely used as a packaging and construction material. The most frequently used plastic after PE and PP.

Q
R
S
Semiconductor laser:
A laser whose radiation is generated in a semiconductor and stimulated by an applied voltage.

Solid-state laser:
A laser with a solid medium, such as a doped crystal or glass. The first functional laser was a ruby laser. After the CO2 laser, the solid-state laser is the laser type most commonly used in industrial production. Semiconductor lasers also use a solid state to generate laser radiation but, due to their different mode of operation, they are generally not regarded as solid-state lasers.

T
Tear-off perforation:
An intended weakening of the material achieved by a series of holes, which simplifies cutting along the perforation line. These sort of predetermined breaking points serve as opening aids for packaging. Production is also possible with the help of laser perforation.

U
V
W
X
Y
YAG laser:
The YAG laser, which forms part of the group of solid-state lasers, uses doped yttrium aluminium garnet as the laser medium. Its properties can be varied to a large extent by selecting the element used for doping. 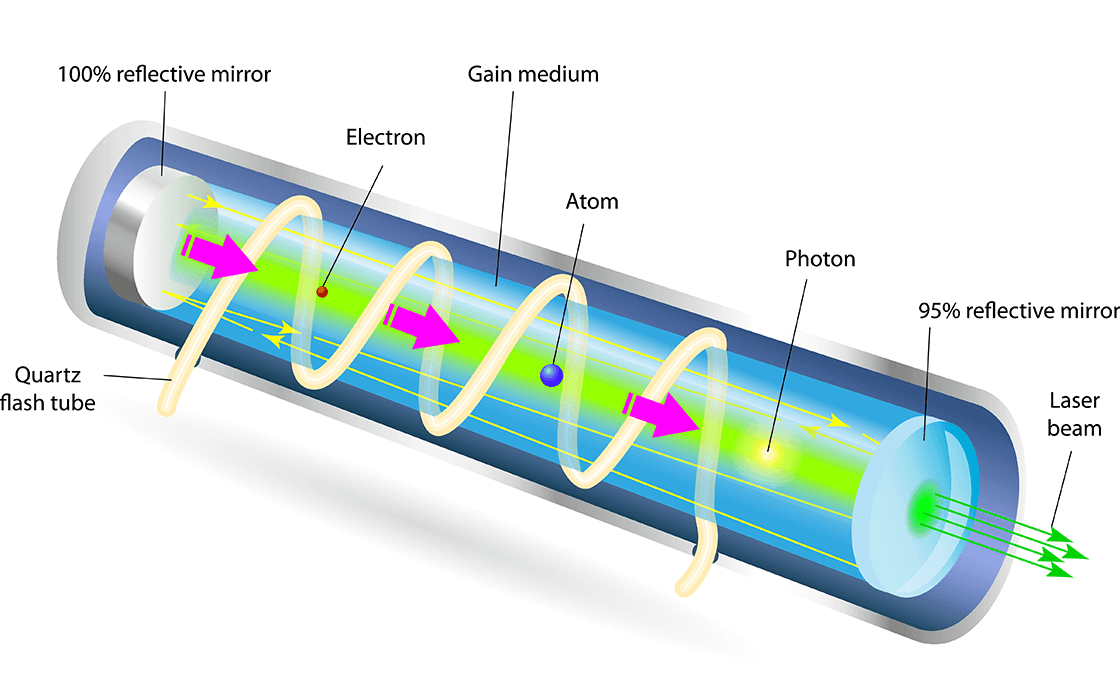 How a CO2 laser source works